Millions of tourists will flock to Thailand this year after seeing pictures of gorgeous beaches and hearing stories of friendly locals. Thailand is a fantastic place to visit, however, there are certain drawbacks to the country. If you aren’t aware of certain problems, they could happen to you.

There are many reasons why one should not visit Thailand. The first and foremost issue is that smog is crippling Bangkok’s inhabitants. There are several dangerous areas within the country. The king and military dictatorship currently rule the country with an iron fist. Lastly, many others flock to Thailand to get away with the illegal activity they can’t do at home.

Why do so many people visit Thailand? Aside from the beautiful nature, many travel to take advantage of a relatively poor population. Why are certain features of Thailand so unenjoyable, you may ask? We’ll explain.

If you don’t think smog is a legitimate negative issue, you’ve clearly never stepped foot in Asia. Imagine running a marathon in Bangkok vs California. Just this past year, smog levels reached such heights that the city of Bangkok closed every elementary school for 350 kilometers to avoid endangering the children.

On top of that, there are no real plans to address the growing issue of air pollution. On certain days, you can barely see several kilometers from the top of a skyscraper. Everything has a sepia tone to it. While I was in the country, the government recommended that people take water hoses and spray them from their rooftops to drive out the smog (which makes absolutely zero sense).

It’s not just Bangkok that experiences this problem. Every year, Chiang Mai experiences a similar issue that locals call ‘Burning Season’. Every year around early March, the air quality takes a sharp turn for the worse in this community. The smog is sometimes so strong that you’re unable to see past 100 feet in front of you. Visitors get rashes and those with asthma find they need to refill their inhalers often.

Here’s what happens – the farmland surrounding Chiang Mai is often intentionally burned once a year. The farmers do this as a way of bringing out nutrients in the soil to better help their crops in the coming year. However, a lot of these farms are rubber plantations. Is there anything worse than a city could choose to burn?

The intense haze often doesn’t disappear until rain drives out the smog. Unfortunately, the rainy season is several months after the beginning of March – so the burning season often lasts 2-3 months.

If you do visit Thailand, buy a fancy pollution mask online. Your lungs will thank you.

If you are in Thailand, you will see pictures of the King everywhere. It is important that you keep any negative comments to yourself. Lèse-majesté is a French term meaning “to do wrong to majesty”. In Thailand, there are lèse-majesté laws that prohibit anyone from speaking ill of the King.

These laws are intended to stifle dissent, but in the past, there largely wasn’t a need for them. It is only in today’s Thai society that these laws are being enforced. Many Thai netizens are expressing dissatisfaction with a King who has allowed a military dictatorship to overthrow the only democratic procedure in the country.

Plus, the Thai king has an odd habit of wearing women’s crop tops in public. It’s odd. He even threatened to shut down Facebook in the country to stop an embarrassing picture from going viral.

There are few worse jails than the ones in Thailand. Don’t end up there for speaking out against the King. You can never be sure if a government official is nearby.

It’s honestly baffling how many Westerners end up in Thai jail. If you think normal jail sounds atrocious, then you’re really going to be disheartened to hear that 25 people sleep in one cell and you only eat soupy rice all day in Thai prison. Why is it that so many Americans and Brits end up incarcerated?

To begin, Thailand has extremely strict drug laws. The majority of travelers don’t take this sort of thing seriously. There are several purchasing traps that the police force has created in popular Thai bar districts.

Aside from the notes about drugs, something about Thailand lures in foreign people who commit crimes. I don’t know if it’s the low cost of living, accessibility to largely unregulated (and deeply concerning) prostitution, but for some reason, Thailand is a hotbed for criminal activity. Said criminals are often tourists who feel as though they can get away with anything they want because they’re not at home.

Sex tourism is rampant in Thailand. One can find the sad and disturbing on every corner. No matter what happens, reports from well-intentioned people to the police seem to fall flat. While prostitution is technically illegal in the country, the police accept bribes to continue this black market business.

It’s challenging and unsettling to see an 80-year-old white man with a 20-year-old Thai girl from a poor, rural area. Many of these trafficked women are not in a position to choose their own fate. It’s disturbing behavior. Even more disturbing is the fact that Thailand doesn’t take the problem seriously.

One is not able to intervene very much in these circumstances (despite genuine efforts to try). You can separate two individuals from one another, but the creepy old men will face no repercussions for their actions, and thus will simply try again. Thailand needs to change it’s laws or legitimately enforce the current ones.

If you are traveling with a family, you might want to plan certain activities in advance. For example, children with autism are highly overwhelmed in a city like Bangkok. Between the constant noise and shining bright lights, it’s not a great place for those easily overwhelmed.

Thai traffic is quite crazy. We recommend taxis, Grab, and tuk-tuks. However, if you need to walk a few blocks, there are seldom sidewalks available to you. This can become very intimidating in rush hour traffic.

If you have a sensitive stomach, expect to have a bad case of the ‘Thai Runs’ during your week in Thailand. Some people stick to rice to avoid this all but inevitable fate.

The smog often creates issues for those with sensitive skin, as well. Bring calamine lotion as many are prone to get rashes. This is especially true if you walk in the hot sun for more than a few hours. If you are asthmatic, definitely bring an inhaler and a high-quality face mask from a place like The Home Depot.

Things You Shouldn’t Do in Thailand

You should definitely not break the law in Thailand. Thai prisons offer some of the worst jail conditions on the planet. You should certainly not partake in elephant or tiger tourism that endangers the animal’s well-being. Find an ethical animal sanctuary, instead.

Is Bangkok Safe for Female Tourists?

Bangkok is largely a safe place for female tourists. Many females actually say that they are more intimidated by sexually charged Western males in their hostels than any potential danger elsewhere in Thailand. As always, be cognizant of your surroundings. Avoid activities like walking alone late at night or being stupid with highly valuable possessions.

link to Top 10 Things To Do In Krabi Thailand

Krabi, Thailand is a city that covers a significant amount of distance. It can be hard to properly prepare and plan for your hotel stay if you don’t fully understand the layout of the Krabi... 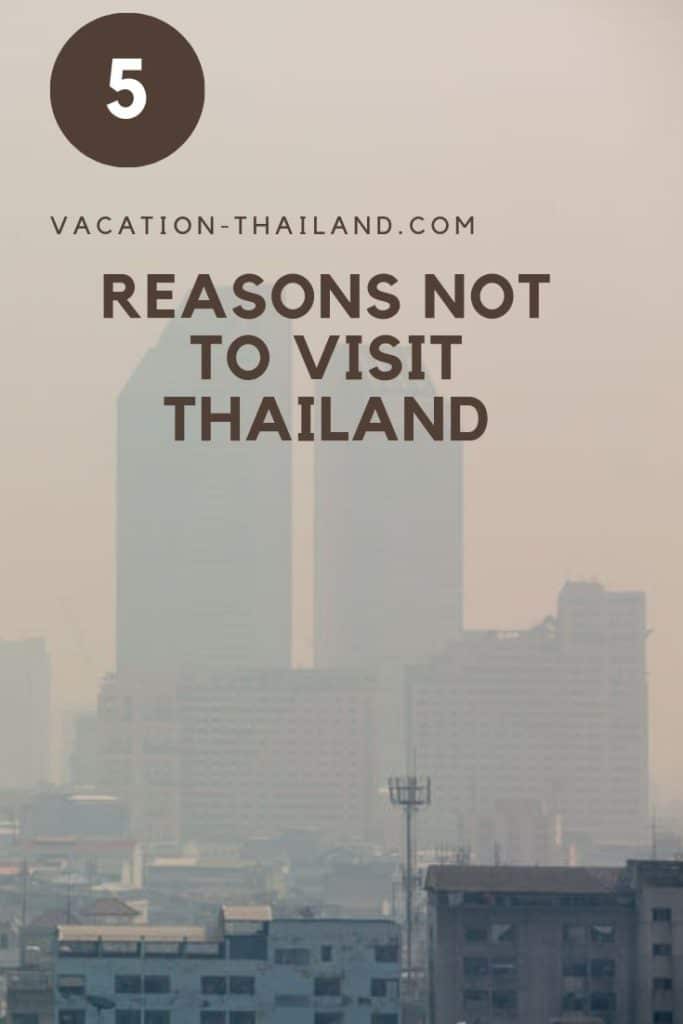