Figuring out currency issues can be a bit of a hassle, especially in a country that operates very different from your own. Travelers going to Thailand should do upfront research to learn about Thai currency, exchange rates, and other pertinent information having to do with transactions abroad. By familiarizing yourself ahead of time, you’ll feel much more prepared, confident, and ready for a great adventure.

What is the currency in Thailand? Thailand’s currency is called the baht. You will need to familiarize yourself with it before departure, to ensure smooth and stable finances during travels. The coins and notes vary. The smallest form of the currency comes in the form of coins, called satang. There are 25 and 50 satang coins, but they aren’t widely used anymore. Instead, the overwhelming majority of transactions are made from baht, including 1, 2, 5, and 10 baht coins, and 20, 50, 100, 1,000 baht notes.

Knowing the available coins and bills is just the tip of the iceberg, so to speak. It’s important to learn about exchange rates, how to get cash, where to get it, and more. We’ll cover all of the details you need to prepare yourself before departing.

As aforementioned: Thai currency takes on a variety of forms. Satang coins are rarely used, but baht coins still are in wide circulation and are a common form of payment for small purchases. The baht is represented by a symbol of an uppercase “B” with a slash through it, commonly seen on signs and in shops.

Get ready to exchange your currency for a colorful rainbow of Thai baht, ranging from 1 to 1,000 notes. It’s possible to use certain other currencies in Thailand such as the U.S. dollar, but it’s not widely accepted, making it difficult if you haven’t converted your cash.

The best way to find current exchange rates is by using a live exchange converter online. The converter is quick and easy and gives the most up-to-date information about current rates from any country in the world. By knowing the exchange rate, you’ll be able to do quick math in your head in order to calculate the cost of food, merchandise, transportation, and lodgings.

On average, the cost of living in Thailand is very affordable. The rate fluctuates but usually hovers between 30-45 Thai baht per U.S. dollar. In addition to using the website, it’s a good idea to get a currency exchange app for your phone so that you can convert prices while on the go. It’s common to try to debate the price with street vendors, so having an idea of general conversions in your head is an easy way to be prepared when you want to make a purchase.

Best Practices for Getting Cash in Thailand

If you opt to bring cash from your home country, exchanging it in Thailand is quite easy. U.S. dollars and euros are the easiest to exchange, with currency offices in the airport and also across major cities.

Like any foreign country, you’re bound to experience some international and ATM fees as a result of your home bankcards. Using credit and debit cards in Thailand is easy; most medium to large-sized businesses will accept your cards, it’s the night markets and street vendors that you’ll want to save your cash for. Most stores, restaurants, hotels, and cafes will accept credit and debit cards.

ATMs are easy to find in Thailand, especially in major cities such as Bangkok, Chiang Mai, and the popular islands in the south of the country. If you haven’t arrived with pre-exchanged money, it’s recommended to use an ATM at the airport upon arrival just to have some cash in hand.

In order to keep your bank account secure and running, be sure to let your bank know ahead of time about your travel plans. If you forget to tell them, the foreign activity on your card will be seen as suspicious, and possibly fraudulent. This commonly leads to banks shutting down cards as a protective measure, which often leaves travelers high and dry without a way to get money out until they can call their bank to straighten out the situation. Because of this reason, it’s advisable to carry a bit of cash at all times. Sometimes, even despite notifying your bank, they might be extra suspicious regardless and the same effect can take place.

Should I Tip in Thailand?

To tip or not to tip: a common question that travelers ask when arriving in a new country. It’s different in every country, making it a confusing task when closing a dinner bill for the first time on a trip.

In Thailand, it’s not very common for the locals to tip. However, tipping has increased with the influx of tourism, and while it isn’t required, it is sincerely appreciated. However, this depends on the setting that you’re in.

For example, Thai street food vendors will give you a confused look if you try to give them more money than the price of your food. For this reason, it’s easiest to stick to the price that they tell you.

At restaurants, 10% is a good tip and can be adjusted accordingly due to the level of service. Bars are dependent on the type of service. If you’re ordering drinks at the bar, a tip generally isn’t required, but for table service such as at beach clubs, it’s a good way to ensure that you receive proper service.

Taxi rides can be rounded up to include a tip. Just be sure to agree on a price with your driver before departing, because it can be easy to get taken advantage of if you don’t do so beforehand.

What is the best currency to use in Thailand?

Thai baht is the best currency to use in Thailand. Although occasionally other currencies are accepted, it is not widespread and can cause problems if it’s the only type of currency that you have.

Can you pay in dollars in Thailand?

We don’t recommend trying to pay in dollars in Thailand. While it might be accepted occasionally, it’s not worth navigating the language barrier, and it will most likely cause you more stress than anything else. In a last resort, it might be worth a try, but generally isn’t the way to go.

Is it better to change Thai Baht in Thailand?

It’s easy to change your own currency to Thai baht right at the airport on arrival. Many travelers will choose to do this because there are a handful of currency exchange services available within the terminal area. However, if you choose to do it in your home country, it’s one less thing to tackle upon arrival. 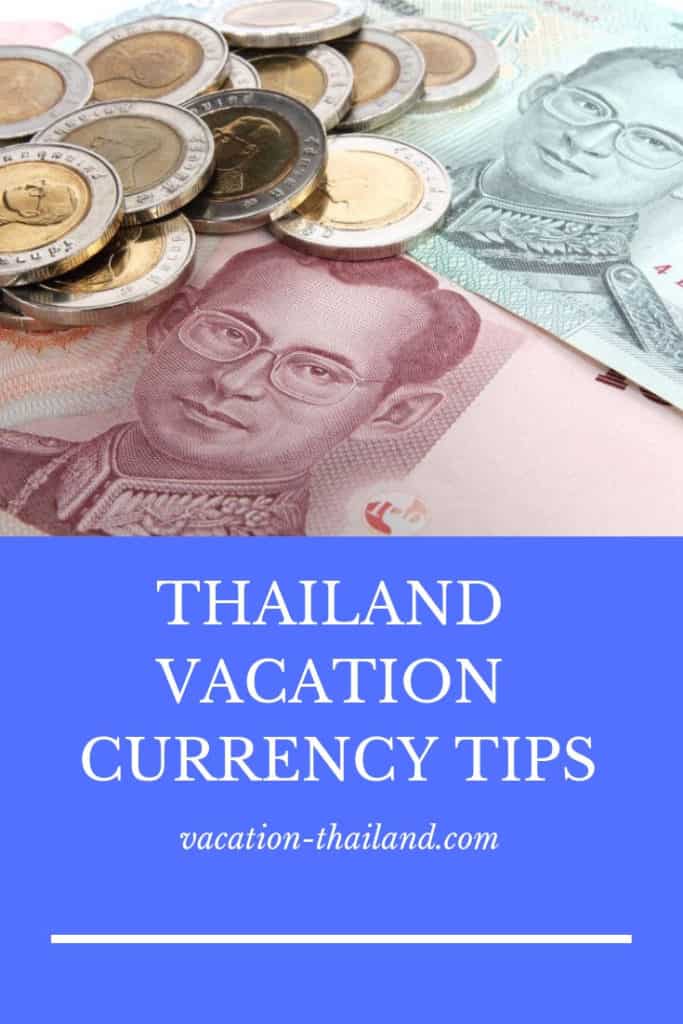