All-night parties on the beach are always a riotous time, but Thailand’s Full Moon Party takes it to another level by drawing in travelers from all different corners of the earth to participate in the madness. This intense festivity is infamously rowdy, to say the very least. If you’re ready to dance, drink, and make a million new friends under the stars and later rising sun—then make your way to the beach.

What is the Full Moon Party in Thailand? Thailand’s Full Moon Party goes all-night and takes place right on the beach, once every It occurs on the night of the full moon, with celebrations both before and after. Back in the , it began on the peninsula of Hat Rin on Ko Pha-Ngan Island. Travelers can expect loud electronic or trance music, exciting beachside entertainment, and enough rowdy clubs to explore in between.

The Full Moon Party has a unique history and has expanded to other areas in Thailand as a result of its popularity among tourists and locals alike. This spectacle isn’t for the faint of heart, but it certainly is an evening to remember—if you don’t party too hard, that is. From buckets of vodka mixers to sunrise tequila shots, there’s more than enough to drink for every partygoer.

The History of the Full Moon Party

Surprisingly, the Full Moon Party initially had simple beginnings compared to what it has exploded into. It was originally more of a small house party that repeated every month on the full moon, with guitar tunes and a big group of friends. While it’s hard to say the exact year that it started, the majority votes that it was in the early 1980’s—even though some say it wasn’t a big ordeal until the 1990s. Times were different before the age of social media, and the word didn’t spread as fast as it does nowadays.

The party got started on the shores of Hat Rin, a peninsular beach on the gorgeous island of Ko Pha-Ngan. Paradise Bunglows hosted the first Full Moon Party decades ago, right on the shores that used to be more tranquil before the notoriety built up. The bungalows still welcome beach relaxers and partygoers alike, with a laid-back pool deck and soft sand shores only steps away.

As word of mouth spread over the years, and the social media propelled it, even more, the Full Moon Party is now a notorious part of traveling in Thailand. It draws thousands of travelers each month, ranging from 5,000-30,000. Backpackers trade sunrise stories all across Southeast Asia, and the long list of crazy tales continues to grow as more travelers make their way to check out the experience.

Music lovers will have their pick between electronic dance music, house, reggae, R&B, and essentially everything in between. The beach is jam-packed all night long, and the bars lining the beach aren’t anything close to vacant either.

In addition to music and an endless supply of adult beverages, there are also special performances that pop up all over the area. It’s common to see fire rope jumping and fire dancing, with wide-eyed onlookers enjoying the feat. There’s a lot that can be said about Thailand’s Full Moon Party, but the easiest way to describe it is a simply mad party of epic proportions—probably the biggest you’ll come across worldwide.

The Full Moon Party’s popularity led to the creation of other parties in between, such as the Half Moon Party and Black Moon Party. These parties don’t particularly deviate from the norm in any way—if anything, they are another excuse for tourists to get rowdy in between the major events that the full moon brings once a month.

The Half Moon Festival features three stages of music, food stands, entertainers, and everything else that comes similar to the regular Full Moon Party. Like its namesake, it occurs on the half moon, twice a month. It’s a bit different since it occurs inland instead of right on the beach, but it draws the same crowd. With a two week rotating schedule, it’s easier to work into travel plans on a whim.

The Black Moon Party is held on the night of the new moon, once a month. It’s less advertised and uses Facebook to get the word out. Unlike its rowdy siblings, this party is a bit more laid back than the rest, with more of a hippie vibe. The setting is more music-focused, and less about excessive drinking. However, don’t expect to go thirsty, either.

How to Prepare Yourself for the Party

It would be a lie to say that the Full Moon Party is completely safe. With copious amounts of alcohol, fire-wielding performers, and questionable history with crime, this party ground isn’t a quiet walk in the park.

The surrounding town has over 40 medical facilities, trained to treat partygoers for any and all injuries, including excessive alcohol consumption. There have been reports of robberies, drugging incidents, and fire injuries in years past. Luckily, most end up having the time of their lives and escape with only a hangover the next day.

There are a few must-follow rules to ensure that you have a rocking time, and that nothing tarnishes your experience.

Where is the best Full Moon Party in Thailand?

The best Full Moon Party in Thailand is often stated to be the original, right in Ko Pha-Ngan. Due to its history and origins, this specific destination has the best reputation for an original Full Moon experience. Although visitors are sure to have fun at a copycat, smaller versions, its recommended to check out the original for the most riotous party in Thailand.

How much does the Full Moon Party cost?

The party costs 100 Thai Baht to enter, which is only about $3.15 USD. Drinks are available for purchase and range from 200-300 Baht. Since it’s a major tourist attraction, the Full Moon Party prices are a bit higher than you might find in Bangkok. However, everything is still incredibly reasonable in price, and you won’t be spending too much money overall. 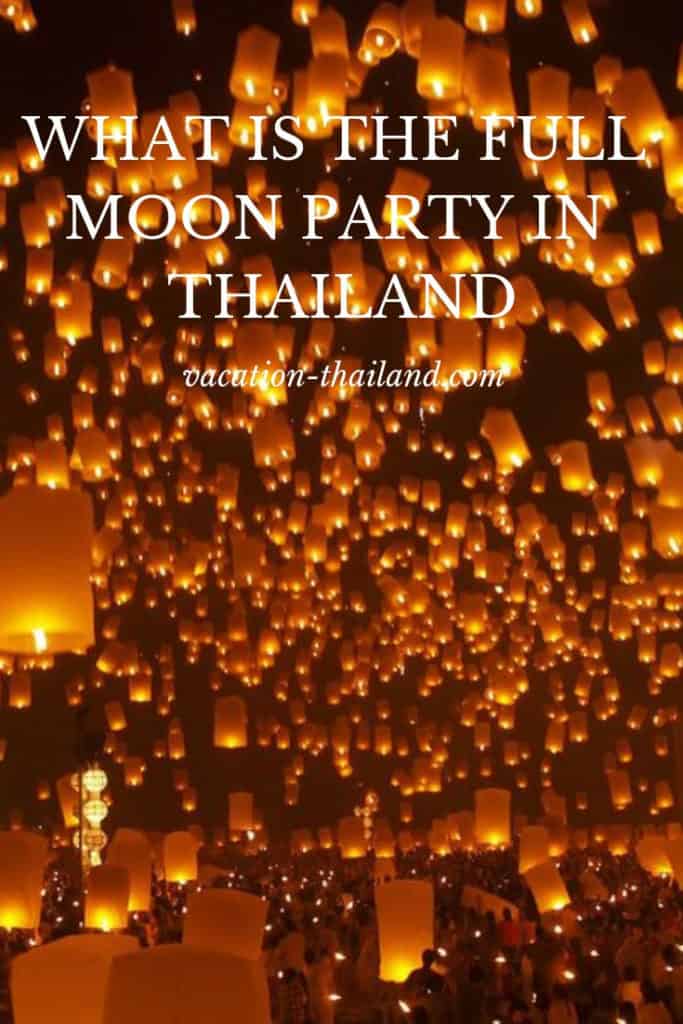