Muay Thai, or otherwise known as Thai Boxing, is an ancient martial art and combat sport from Thailand. This sport was originally created for military purposes, and more specifically, keeping the emperor safe from enemies. Nowadays, Muay Thai is practiced all around the world. In Thailand, this sport is a favorite past time for many, as they cheer on their small-town heroes from local provinces on their journey to become the reigning champion.

The best places to watch a Muay Thai Fight are:

What was once touted as Bangkok’s best-kept secret, is now one of the busiest and most infamous places to watch Muay Thai fights in the city. Channel 7 Stadium is located about a 15-minute walk from Chatachuk market, and hosts fights every Sunday at a matinee time.

These fights are broadcasted throughout the country. The fights start around 2:15, but it pays to get there early — or late if you prefer. If you arrive after 3 pm, most of the curious tourist onlookers have left, and you will be just in time to watch the more top-billed fights.

Channel 7 Stadium is one of the most authentic places that you can watch a Muay Thai fight in Bangkok. This is where many locals religiously come every Sunday. There are hard wooden seats and bookies throwing hand signals and yelling throughout the arena. Not all stadiums allow gambling, but this one sure does. Like many places in Southeast Asia, it is acceptable to bring your own snacks and drinks.

There is a 7-Eleven just outside of the stadium so you can grab yourself some Chang’s (one of the local beers) and a Toastie (essentially a fast-food panini) and get yourself a seat inside the arena. Once inside, you will notice that this place is CROWDED. Long gone are the days of this place being a local secret.

Sure it is hot and crowded, but there is a certain energy here that is unmatched in some of the larger, more famous arenas. The admission is free, so stay for a few fights, or the whole show if you’d like. If you are looking for a Muay Thai stadium with a local flair, Channel 7 is your spot.

For a more family-friendly venue, check out the Rajadamnern Boxing Stadium. This is one of the most prestigious Muay Thai stadiums in Thailand and is more centrally located than the once raining champ of Bangkok stadiums, Lumpinee. In fact, Rajadamnern is the oldest stadium in Bangkok, dating back to around 1945.

The tickets at Rajadamnern are a bit on the pricey side, but you get your own seat, a more comfortable watching experience, and top-billed fights. For ring-side tickets, you can expect to pay around 2,000 baht. But for the “second-class” seats, you can pay 1,500 baht. Some say these seats actually have a better view than the ring-side ones.

Additionally, Rajadamnern Boxing Stadium is more progressive than a lot of the Muay Thai stadiums, as you can see women fight here too. Lumpinee, which is Rajadamnern’s biggest competitor and owned by the Thai military, does not allow women to fight, or even get close to the ring.

Also, Rajadamnern hosts more fights, with events happening on Mondays, Wednesdays, Thursdays, and Sundays. All fights start at 6 pm, and Sunday hosts the lower-tier fights. Rajadamnern is about a 20-minute walk from Khao San Road. If you don’t feel like walking, you can expect about a 100 baht taxi/tuk-tuk ride to get you there.

Just outside the stadium, there is street-food galore, so come hungry! But, Rajadamnern is not like Channel 7 in that outside snacks and drinks are not allowed. However, inside the stadium, they offer a great selection of foods and drinks and the servers will bring them right to your seats. Overall, this stadium is the best for casual tourists or families looking to have an authentic, yet comfortable, Muay Thai experience.

If you are looking for an intense, action-packed fight with amazing production, then the GMM Grammy Studio is the fighting arena for you. This studio is located in downtown Sukhumvit on a small soi (or side street). The style of fighting here is reminiscent of American boxing or wrestling, with loud, lively hosts, a high-production value, and a high percentage of knock-outs.

This type of Muay Thai fighting is becoming increasingly popular with the younger Thai generations, indicating a shift away from the traditional, slow boxing methods of the past. The reason for the high percentage of knock-outs is due to the use of lighter gloves that are more similar to typical MMA fighting gloves. These lighter gloves lend for faster reactions and more powerful blows.

GMM Grammy Studio broadcasts their fights throughout the country of Thailand and they are quickly picking up popularity. The MX fights are held every Friday at 8:45 PM and are free to attend. Like Channel 7, you are allowed to bring your own drinks and snacks to this fight. This studio can be reached using the BTS or MTR systems.

Recently, the stadium was moved slightly out of the city, close to Don Muang airport. The new location has made it much harder to reach for most Muay Thai enthusiasts, as the fights start at 6:30 pm and the rush hour traffic around that area can be quite bad. The fights are usually on Tuesdays, Fridays, and Saturdays, with the higher-billed fights happening during the week.

If you are interested in the history of Muay Thai and some of their key players, then seeing a fight at the new Lumpinee Boxing Stadium is a must. The tickets are about the same price as Rajadamnern Boxing Stadium, at about 1,800 baht a pop. The money does go to the Thai military, just so you are aware.

This stadium is more along the lines of a “traditional” Muay Thai stadium, with only men being allowed to fight here. With that being said, Lumpinee does attract some excellent fighters, so if you can make the trek out and want to learn a little bit about Muay Thai history while you are at it, then check out Lumpinee Boxing Stadium.

How much can you expect to pay to see a Muay Thai fight?

Depending on the type of Muay Thai fight you are looking to see, you could pay nothing, all the way up to $60 a person. The arenas that broadcast the fights are usually free. The bigger stadiums like Lumpinee and Rajadamnern charge about $60 a person.

What is Muay Thai?

Muay Thai is an ancient martial art and combat sport in Thailand. It incorporates stand-up striking and many different clinching techniques. The typical Muay Thai fighter will use his or her fists, elbows, knees, and shins throughout a fight. 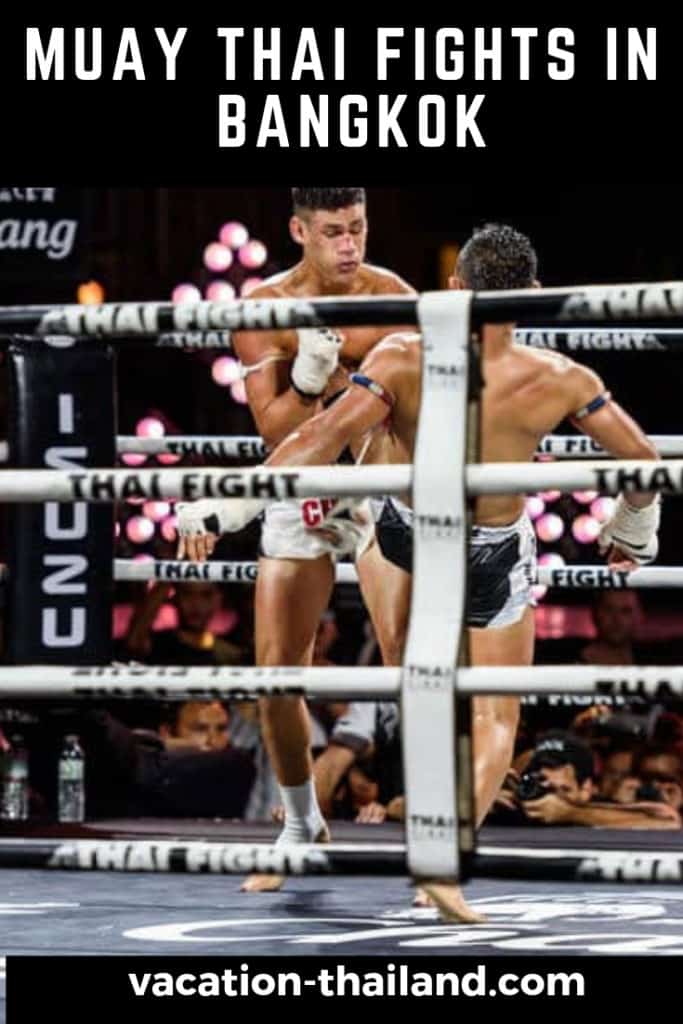