Planning a trip to Thailand takes a lot of thought and preparation, whether it’s your flight details or choosing between a myriad of amazing activities. If there’s one place to start the planning process, it’s your airfare itinerary. With a handful of airports to choose from, it’s important to consider what part of the country you want to start in and your budget.

Which is the best Thailand airport to fly into? If you’re arriving from a long haul flight, it’s likely that you will arrive into Suvarnabhumi Airport in Bangkok (BKK), which is an international hub for over 100 carriers. Don Mueang International Airport (DMK) is the other major airport serving Bangkok, mostly catering to budget airlines. If you arrive from elsewhere in Southeast Asia, you can take your pick from a handful of airports around the country based on your regional preference.

Travelers arriving from far overseas destinations usually stop into Bangkok before heading anywhere else. However, those with the advantage of a short commute into Thailand can easily choose from a variety of airports in different parts of the country. The hardest, yet exciting decision to be made is deciding which area to experience first.

First time visitors to Thailand are likely to gravitate towards Bangkok, the vibrant capital of the country. With two major international airports, it’s easy to get to arrive on the carrier of your choice. This buzzing metropolis needs two airports to keep up with all of the traffic.

BKK is a busy airport drawing in crowds from all over the world. Travelers arriving from far away destinations such as the North & South America, Europe, and Africa are likely to arrive in BKK due to more common flight routes. However, the airport also includes all Thai carriers, making it popular for domestic flights in addition to its impressive selection of international arrivals.

The airport is 25 kilometers from downtown Bangkok, which can take up to an hour by car or public transportation. Taxi services are readily available, ranging from 300-400 Thai Baht, around $10 USD. Alternatively, the airport rail system is usually better to avoid traffic, and only costs 45 Baht per person, just a little over one U.S. dollar.

DMK is the best airport pick for budget travelers. Low-fare carriers such as Scoot, Air Asia, and Nok Air are all frequent fliers here. Although most of the arrivals are domestic or international from within Southeast Asia, it’s still possible to fly from some farther destinations in Asia such as China, Taiwan, South Korea, and India.

DMK is 28.4 kilometers from Bangkok, on the eastern side of the city. Taxis are available, with costs hovering around 350 Baht. If you opt for public transportation, buses depart every 15 minutes for 60 Baht, and you will need to catch a train to finish the ride. This method is a bit lengthier, taking over an hour on average.

Beach Lovers: Flying Into the Islands

Thailand is renowned for its beaches. With all that the southern part of the country has to offer, airports are available throughout, making it simple to plan around your desired beach destination. Both island and mainland hotspots are reachable by direct flights, both domestic and international.

Krabi is a major tourism destination, due to its magnitude of gorgeous beaches and proximity to popular Koh Lanta. This international airport services the rest of Thailand, and also many international arrivals. It’s possible to fly directly into Krabi from further destinations such as Singapore and Australia, making it easier than connecting in Bangkok.

KBV is 17 kilometers from the city center, which takes about 15-20 minutes by car or airport shuttle and around 30 minutes by bus. Busses are available to and from the airport, but they only run five times per day, costing 90-150 Baht per person.

Flying into Phuket is very easy, due to an influx of tourism into the area over the last 10 years. This hub is busy year round, but especially during the high season of travel, from November through March. If you want to visit Phuket itself, Phi Phi Islands, or the Similan Islands—Phuket is the best arrival point.

The airport is 32 kilometers from the city, with taxi services available from indoor counters and outside the terminals. Be advised that the indoor taxi counters generally charge a bit more. Many hotels offer taxi services, as well.

Alternatively, travelers can take airport or local busses between the hours of 6 AM and 10 PM. Depending on where you’re getting off, prices range between 30-50 Baht.

USM manages to be a destination of its own, with unique architecture and thoughtfully designed interiors, unlike any other airport you’ve seen. The wooden chairs and open-air space add a nice touch, matching the beauty of Samui itself. The airport is privately owned by Thai Airways, offering an extensive timetable of domestic and international flights.

Transportation from Samui depends on where you need to go. The airport itself is very close to town, making it easy to show up and get where you need to go. Taxi service and car rentals are available. Travelers going on to the smaller island of Ko Pha Ngan can take a short bus ride to Big Buddha Pier in order to catch a ferry across. To get to Ko Tao, travelers will need to get to Maenam Beach Pier, which is equidistant in comparison to Big Buddha Pier.

Mountain lovers will want to book their air travel straight into either Chiang Mai or Chiang Rai. Chiang Mai boasts the fourth busiest airport and a city filled with an impressive history, ranging from Buddhist temples to night markets. It’s easy to catch some nature time in addition, as the city is nestled in the most mountainous region of the country.

CNX is the biggest gateway to Northern Thailand. Tourism has been increasing in recent years, welcoming over 2 million visitors per year. If you have a desire to see the mountains, Chiang Mai is truly the best choice other than traveling by land. This airport services a multitude of domestic flights, along with international arrivals from other Southeast Asian cities and China.

Lucky for anyone jet lagged, CNX is only about a ten-minute taxi or shuttle ride from the city center. If a taxi isn’t good enough, there are also limousine services available for rent. The public transportation consists of tuk-tuks, which cost around 50 baht per ride, one way.

CEI is the gateway to the northernmost part of Thailand, close to the borders of Laos and Myanmar. In addition to mountainside beauty, Chiang Rai is well known for Wat Rong Khun, the White Temple. If this is on your bucket list, make sure to book your flight into CEI. The airport is packed with domestic flights, but easily accessible from other cities in Southeast Asia.

The airport is only 8 kilometers from the city center, making it a seamless commute. With taxis, limousines, and car rental, it’s easy to hop a ride into town. Public transportation is available with the airport bus, which only costs 20 Baht. Service starts at 6:00 AM and finishes by 11:00 pm.

What are Thailand’s biggest airports?

Thailand’s top airports based on size are as follows:

Is it cheaper to fly into Bangkok or Phuket?

On average, it’s cheaper to fly into Bangkok compared to Phuket. Since Bangkok is a major worldwide hub, there are more flights and extensive routes to and from destinations worldwide. Stopping in Bangkok first is a good idea to save some money, and also experience the big city buzz. Flying from Bangkok to Phuket only takes about an hour, and is almost always under $100 USD round trip. 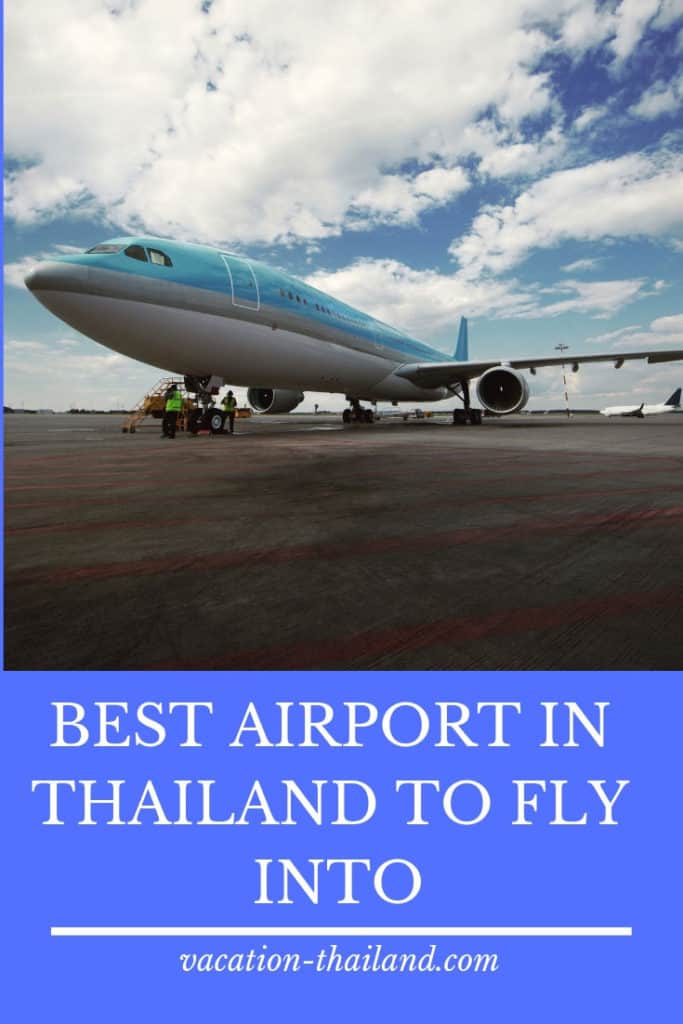